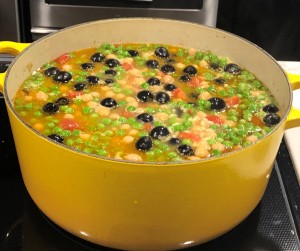 Our September 2019 Wine and Words Book Club meeting was held at Jodie’s and Ken prepared a wonderful paella recipe from Julia Child’s The French Chef cookbook. Everyone but Kay attended the meeting.

Members told us about book they had read over the summer months.

Ann enjoyed Property and would not recommend Bridges of New York.

Karen recommends Women Rowing North, by  Mary Pipher, who wrote Reviving Ophelia, and Rules for Visiting, by Jessica Francis Kane, which led to a discussion about having a good social foundation as we age.

Cindy read the Aviators Wife, about Charles Lindbergh, Room (she loved it), The Lilac Girls set during World War II, about three women whose paths cross when one is sent to a concentration camp. She also read The Year of Magical Thinking, by Gideon, about how a woman deals with death, The Hours, about Virginia Wolf, Brown Girl Dreaming, and Educated.

Ann suggested Brain on Fire, about a woman who had a brain virus.

Sandie read and enjoyed Where the Crawdads Sing. It is widely popular on Amazon.com and Sandie wondered why it was #1 on the Amazon.com charts. Cindy felt it was probably because it was selected by Reese Witherspoon for a Hello Sunshine Book Club pick.

Ken suggested Nomad Land about people who lost everything and started over. The author, Jessica Bruder also wrote Burning Book a pictorial essay about the annual Burning Man event in the Arizona Desert.

Two other books recommended were Natural Causes, by Barbara Ehrenreich, and Mudbound, which has been made into a motion picture by Netflix.

Cindy read, Between the World and Me, and she felt it was depressing.

Jodi said Big Rock Candy Mountain, by Wallace Stegner is out as a movie. He also wrote Angle of Repose, (Sandie loved this book. Didn’t we read this in book club?). Jodi also read The Goldfinch.

Linda is reading Less, about a struggling novelist who travels the world to avoid an awkward wedding in this hilarious Pulitzer Prize-winning novel full of “arresting lyricism and beauty” (New York Times Review).

We discussed our meeting schedule for the year. Books were chosen for the next four meetings and suggestions were made for the last three meetings, but we will discuss these after the first of the year:

October at Cindy’s – Where the Crawdads Sing

December/January at Jan’s – The Year or Magical Thinking

February at Linda’s – Rules for Visiting

May at Sandie’s – Brain on Fire?

Sandie mentioned we had planned to read a classic each year to discuss. She suggested Anna Karenina or War and Peace and the group agrees these mammoth reads would be best for summertime, when there is more time to tackle them.

Someone suggested Hidden Figures. Not sure if this was a book or movie recommendation.

It was a good meeting, with lots of lively discussion of books read over the summer.

Our next meeting will be held on October 29th at Cindy’s at 5:30 PM. The book for October is Where the Crawdads Sing.